A while ago I wrote about a couple cardboard tube crafts we did.  I wanted to save up enough to make these great snakes I heard about from Quirky Momma…  Well, we finally had enough tubes (after all, I needed enough to make 2 at one time…)

I used yarn to tie the tubes together, and left a long enough string for my preschooler and toddler to “make the snakes dance” and drag them around.  My daughter helped me put the tubes on the strings after the first one was tied on.  Then they decided to decorate their snakes… 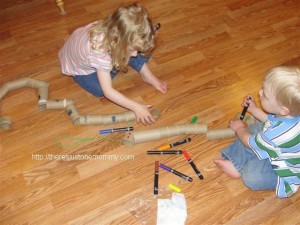 Once they were decorated they had a blast making the snakes dance, wiggle, and just running up and down the floor with them dragging behind. 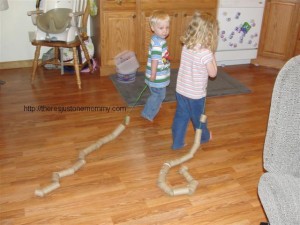 They played with their snakes for over a week, then they started pretending they were wiggly fishing poles.