Another week at library story time.  We’d been coming for years, and still my youngest wouldn’t sit on the rug with the other children.  Instead he sat, frozen on my lap, not clapping, not singing.

“He’s a boy.”   That was my mother-in-law’s answer anytime I voiced my concerns.

But it wasn’t just story time.   (Related Post:  Social Anxiety on the Playground)

When we went to our Mommy and Me preschool gymnastics class he wouldn’t sit in the circle during warm up time.  He would sit with his back to everyone else and push his toy car back and forth on the mat while the other children pretended to be butterflies or cats and did the stretches.

I might have been able to believe he was just shy, or that it was because he is a boy, but it was more than that. 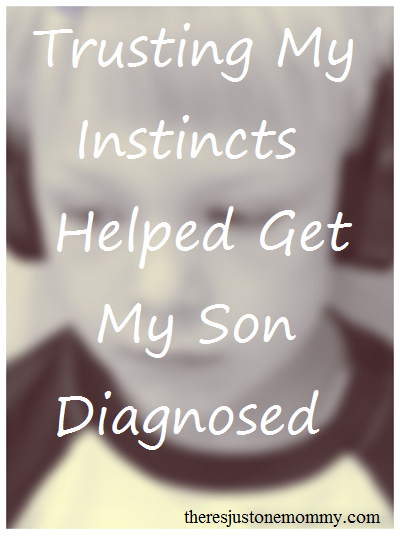 It was more than that.

It was tears when someone came over unexpectedly, or if our usual routine changed.

Unexpected noises that didn’t just make him jump but caused him to cry and race from the room.

It was a toddler yanking off his shoes and socks, screaming as if his feet were on fire, the minute I had them both on him.

He would line up his toy cars.  His trucks.  Toy animals.  Crayons.

You know how some kids walk on tip-toe?  He did it constantly, with his toes actually curled under his feet.

It was him pulling off his wet swim suit the second he got out of the kiddie pool.  (Good thing we live in the country and the neighbors couldn’t see!)

At lunch time he’d only eat his hot dog if you held it for him.  He couldn’t risk getting ketchup on his hands.

If we went out somewhere he’d be so close to me it was like he was glued to my side.

It was my little boy falling out of his chair at meal times several times a day, walking into walls, and struggling to get out of his own clothes at night.

It was all of this and more.  Individually I’d say it was just a quirk, but together?  My momma instincts told me there was something more going on.

It’s been a year and a half since our son was diagnosed with Sensory Processing Disorder.  And, oh, the difference a year can make!

Over that time I have done a lot of reading about SPD.   We’ve worked with an OT (Occupational Therapist) to help strengthen his core muscles.   We started bringing headphones to help him deal with noises in social situations; he also tucks a small fidget in his pocket so he can squeeze it when nervous.

Now he only falls out of his chair when he’s super tired.  He has more confidence when we go to public places where there are other children.  If his socks feel bumpy, he uses his words, pulls them off and tries to fix them himself.

He holds his own hot dog.

The answer wasn’t just that he’s a boy.  I wish I had followed my instincts earlier.

Want to know more about Sensory Processing?  I highly recommend the books The Out-of-Sync Child

You may also want to read about how we’ve dealt with social anxiety on the playground.

You can also find wonderful information at The Sensory Spectrum and on Lemon Lime Adventures.