Sometimes when we are driving in the car the kids start to pick on each other.  (Shocking, I know!)  The other day, as they continued to torment each other, I decided to try something new, a simple verbal memory game that quickly became a hit. 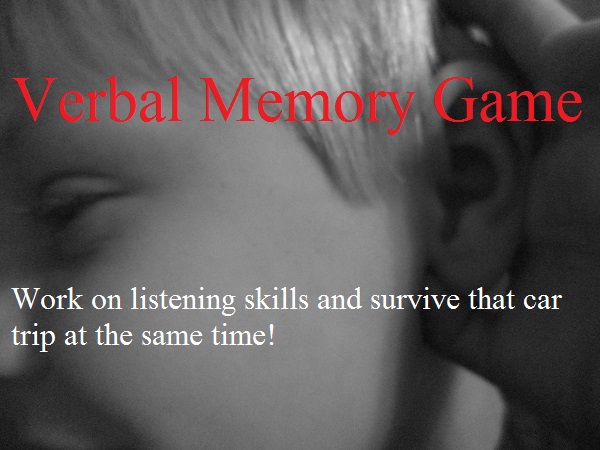 I told them both we were going to play a listening game, so they had to be quiet so they could hear.

Then I listed three animals (cow, dog, horse) and asked the 5 year-old to repeat them to me in the same order.

I made a HUGE deal when he got them right, and then I gave the 6 year-old a turn, naming off three different animals (cat, pig, chicken).

Pretty soon they were hooked!

To make it more interesting I varied the lists, giving them lists of animals, numbers, shapes, colors, letters, vehicles…whatever came to mind as I drove.

After a few rounds I increased the list to include four items.  The 5 year-old was super proud of himself each time he got them right.

And the best part?  They were no longer fighting!  In fact, they were helping each other!

This game is easily modified for kids of different ages and abilities.

For younger children you may want to start off by just listing two animals.  For older children you could make lists of five or more items.  You could also ask them to give each other a list to repeat!

For a few rounds I had my 5 year-old repeat the numbers of our street address.  (You could also use parts of your phone number to help little ones start to learn it!)

Have a game you do to help keep the peace in the car?  I’d love to hear about it!  After all, we could all use a new trick!