Yesterday was a very “2 day” around There’s Just One Mommy’s house.  Nothing I did was right in the eyes of my toddler son.  Nothing.

I made his favorite breakfast – peanut butter toast (he gets that from Mommy).  He got angry and shoved it away.  “No!  Bread!”

When I asked him if he wanted a PB&J sandwich he looked at me like I was crazy and said, “No!  Peanut butter toast!”  I gently pointed out that that was in front of him and he continued screaming a few more minutes before he decided to eat it.

Lunch was much the same.  Nap time, every song I chose to sing was wrong.  Dinner, more fighting and telling me “no”.  And the ending of the day, when I put him in bed, he yelled, “NO!” and then turned so his head was at the foot of the bed.  When I covered him up he said, “No, not this way!” and repositioned himself back with his head at the head of the bed.

I was a little leery about getting him out of his crib this morning.  But there he was, all smiles, playing with his stuffed tiger.  “Tiger fighting,” he told me.

He has just started telling stories with his toys.  A part of being 2 that I love to watch.

“Who is tiger fighting?” I asked.

“Bear!” He tumbled them together and threw the stuffed bear from the crib.  (I guess tiger won that round.)  He giggled and grinned at me like this was the greatest thing ever. 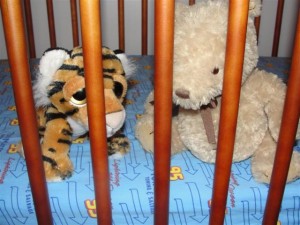 Having the chance to see my children grow as people, learning to play and talk for toys, even being asked to play princesses once again with my little girl, those are the moments I’m thankful for the most.

So, what are you thankful for today?  If you’ve done your own Thankful Thursday post, feel free to leave your link in your comment!