lately.   I really had no idea what they were at first, and for the life of me I could not locate them in any of the toy departments when I checked.  (Turns out they are often used for floral arrangements —  I should have been checking the craft store!)  Then, one day I found Ja-Ru Globbies

in the toy aisle at Big Lots.  I picked them up, hoping they would be the infamous water beads I had heard about.

My kids were super excited about the itty-bitty colorful balls and couldn’t wait to see what we’d do with them.  Me?  I was pretty excited, too!

I explained to them that we were going to put them in water and that they were supposed to grow.

A couple hours later we had a bowlful of squishy, marble-sized balls to play with. 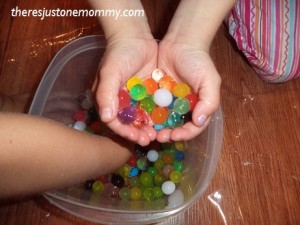 The kids spent the next half hour or so just feeling the water beads between their fingers, watching them bounce in the plastic storage container they were playing in, and enjoying the rainbow of colors.  (I have to admit, my husband and I couldn’t keep our hands off of them, either!) 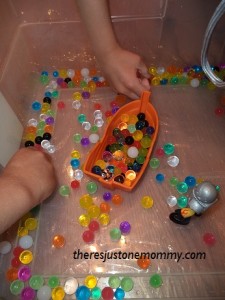 Seems like the black water beads were just perfect for cannon balls.

With all the different colors that came in our little tube, I thought sorting the colors out would be a great activity for my youngest preschooler. 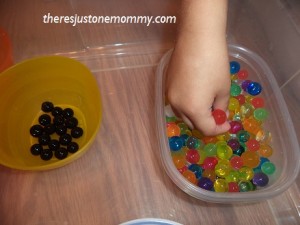 The slippery texture and the small size really worked those hand muscles!

Eventually they were all sorted into containers. 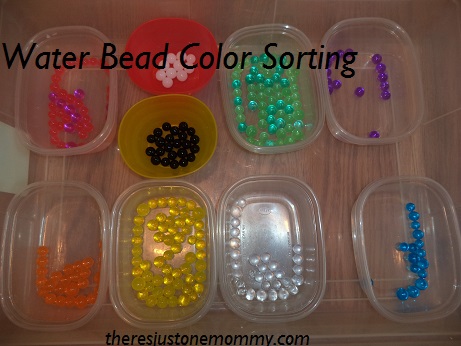 Afterwards, the kids took turns choosing colors to put into their own containers to play with the next time around.  My son chose all the black, blue, green and orange, while big sister got white, yellow, purple, and pink.

So much fun, and we haven’t even put them into a big container of water yet!