Father’s Day is coming up, and let’s face it, most dads don’t really need (or want) another store-bought tie.   So what is it that Dad really wants?

I’ve spent the past few days asking just that. 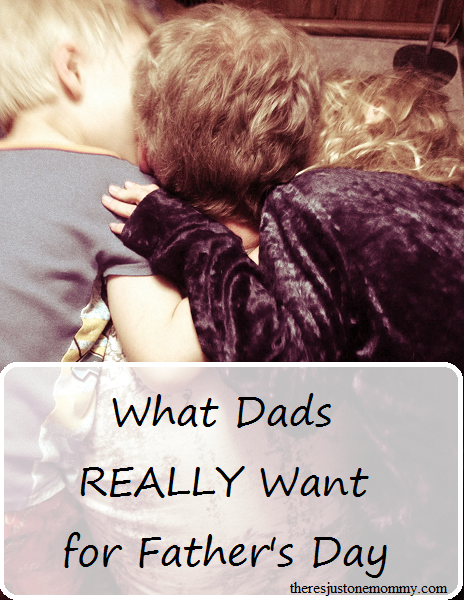 These 12 women asked the men in their lives what they’d like this year for Father’s Day, and this is what they said.

A Father’s Day gift that goes with a favorite hobby is always a big hit!

“Car parts for his classic cars” — Kori,  Just Another Mom

“A new pot to brew his homemade beer” — Anonymous

“He goes on a mancation golf tip right before Father’s Day every year so that is his gift.” — Kristin

“New propane fish/turkey fryer. But I’m also getting him a Qalo silicone wedding band. He’s mentioned wanting one a few times before to replace his silver band. Since he’s a firefighter, they just came out with a thin red line one, so I’m going to surprise him with that.” — Kimberly

“A day to sleep in and a massage (his crew is currently working 7 day/60+ hour weeks)” — Leanne, The Transplanted Southerner

“A professional massage and a new feather pillow because I, the awful homemaker, ruined his old one by putting it through the wash (oops!)” — Karissa, The Crunchy Chronicles

“The one thing I really want is the MLB App on Amazon Fire.” — Melissa, Fireflies and Mudpies

And don’t forget a handmade Father’s Day card from the kids! Those homemade cards are precious mementos dads actually keep.