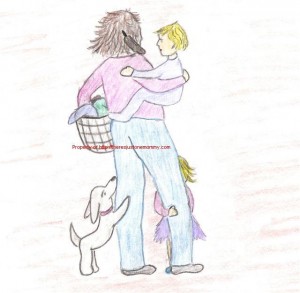 Was there a full moon or something I don’t know about last week?  Were your kids as crazy as mine?  All I know is I couldn’t wait until the weekend.  Nothing I did last week seemed to be “right,” and they were sure to let me know it.

By Friday I had very little patience left.  Since we were in desperate need of groceries, I thought I’d take the kids to lunch, swing by Tractor Supply and let them see the baby chicks and bunnies they have this time of year, and then we’d do the grocery store.  I was even thinking of letting them ride in one of those super-cool car carts that I’ve always tell my oldest I “don’t have a license for.”  Usually I have no trouble getting my kids to go somewhere, especially if I mention McDonald’s.  And my daughter has been asking about the baby chicks, so I figured it was a sure thing.  My daughter, however, was replaced by an uncooperative, rude wild child.

We followed the usual morning schedule (I know better than to mess with toddler and preschooler schedules), and then after Sesame Street, I turned off the television and said, “Time to get dressed so we can go see the baby chicks and eat lunch at McDonald’s!”

She went to the potty and I handed her a pair of clean panties and went to take off her nightgown.  “NO!!!  Don’t take my nightgown off!”

“Okay, well, just get your panties on, then, and we’ll go pick out some clothes,” I replied, trying to remain patient.

She responded by throwing the panties.  I handed them back.  She threw them again and then made one of those raspberry noises at me.  I calmly reminded her we don’t do that at people because no one wants to have spit fly at them.  Then she pushed me.  She is 3 1/2, mind you, so it wasn’t very hard, and I know it is a normal behavior as kids try to figure out right from wrong and how to handle their emotions, but it still had to be addressed.  I took her to the time out corner.  After her time was up I told her she still needed to put her panties on; that didn’t go too well, either.  She started screaming at the top of her lungs and then made an attempt to push me again.  This time I put her in her room, gave her her panties and told her she could leave once she had the panties on and was ready to tell Mommy sorry.

The next 10-15 minutes were filled with screaming.  At this point I knew we weren’t going to the grocery store or out to lunch, so I started making peanut butter and jelly sandwiches.  I went down the hall to check on her twice, reminding her that she could leave her room once the panties were on and she was ready to apologize.  During the process I had to remind myself that she was fine and by doing this she would realize I meant what I said, so I had to stay firm.  It’s still hard, though, to listen to your child crying “Mommy!” while they are in the middle of a fit and not respond.  It also didn’t help her brother’s mood any; at this age when one starts crying the other one often starts, too…

After the 10-15 minutes it took for her to calm down was over, she came out of her room.  I asked if she had her panties on and she lifted the hem of her nightgown, revealing that they were in fact on now.  Then I asked if she wanted to tell me anything and she came over, slipped into my lap and said she was sorry for pushing and yelling at Mommy.  (These are the moments that let me know just how important it is to follow through with whatever discipline technique you use.)  I told her I had peanut butter and jelly sandwiches waiting, and for a brief moment I feared we were going to have round two, since we no longer were going to McDonald’s…

We made it through lunch time, and since our fridge was pretty empty and we weren’t going anywhere, I figured it was a good day to start spring cleaning and scrub the fridge down really good (more than just the shelves, since I do that periodically anyway, but the whole thing).  About two minutes into the process I realized why this type of cleaning doesn’t happen very often:  cleaning with a toddler and preschooler is twice the work!  If they weren’t whining or fighting with one another, they were getting into the things I took out of the fridge.  My son is at the stage where he cries when you tell him “No,” and since I wasn’t letting him squirt chocolate syrup on the floor or open the bottle of hot sauce, he was none too happy.  Of course the three year old couldn’t let him be the only one crying, so she turned on the water works, too.

I turned on the radio and tried to drown them out, but since they were in the same room, right there next to me, it didn’t work.  Eventually I gave up and read them the two books my son had brought and was repeatedly shoving towards me.  (I love that he is a reader, I really do, but sometimes I have other things I’d like to get done…)  Evidently that little bit of attention was all he needed to stop his incessant crying, and Peanut even calmed down a bit, too.

I finished with the fridge once the little guy was taking his nap (more on that tomorrow).  And (thankfully) Daddy was home the next day, and I got to get some groceries to fill the empty shelves.